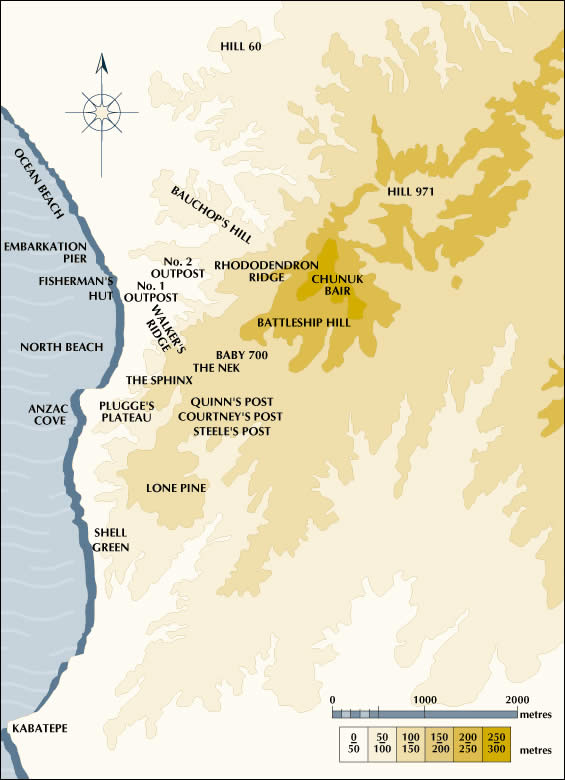 From the trench we went down a hill, crossed a gully and went up the other side. Eventually we came out onto a stubble field. Here the orders were given to open out into extended order. We were now being subjected to sharp machine gun and rifle fire though we could see no Turks. Advancing from the stubble field, we  struck bushy country again and from behind the bushes we could see Turks rising up every now and again. There were four of us who kept well together. Besides myself and Pither there were Keenan and Rose. We fired whenever we could see a target and I know we knocked over some of them, at any rate an odd one here and there.

But by this time our own fellows began to drop. For the worst part they were wounded low in the leg - below the ankle, the damage being done by a Turkish machine gun mounted on a hill opposite. There was a six foot gully on our right and a number of our wounded lads went down into it to bandage up their hurts. At the one time I saw about a dozen of them down in that gully bandaging their wounds. Pither and I pushed on for about 50 yards. Pither being slightly in advance. We spied some Turks on a hill opposite and Pither dropped down to have a shot at them. I was getting down into "the prone position" also, when I received a bullet through the right instep. I fell pretty heavily, luckily behind a fairish sized stone. A chap on my right who had also been wounded made an attempt to hold up my leg. But while doing so he was mortally wounded; in fact he fell dead across my legs. I do not know who he was beyond that he was an Australian. I moved his body off my legs. The pain of my wound made me roll over and in doing so I must have exposed myself. At any rate I was being persistently sniped at. One shot tore my _ and went into the thick muscle of my leg. I heard bullets repeatedly strike the big stone behind which I was lying. In my right tunic pocket I had 10 rounds of ammunition. We had carried as much small arms ammunition as we could when we started out on the advance. A Turkish sniper's bullet exploded this ammunition but I was not injured by the explosion beyond having my skin taken off my right hip.

Shortly afterwards I saw a Turk coming towards in through the bushes at my rear. I closed my eyes and pretended to be asleep. The Turk touched me with his foot. Then he unbuttoned my tunic and saw a money belt that I was wearing. Apparently he was unable to see how it unbuckled for he seized hold of it and bumped me up and down by it until it snapped. The process gave me intense pain. The Turk took the belt away with him, gaining thereby about 8/- and left me. Another marauding Turk came along shortly and went through my pockets. He got a few cards and letters, but missed my watch, which I had strapped into a Havelock tobacco tin.

As soon as I was wounded I had worked off my equipment, hiding the water bottle in a bush within easy reach of me. This second Turk emptied the beef and bully beef out of my haversack but did not take them away. Then he left me. A third Turk came along. He was a luckier man than his predecessors for he found my watch and also robbed me of a ring I was wearing. I had not been able to "gammon sleep" all the time, seeing that I was awake and conscious, he signed to me to come along with him. I signed back that I couldn't walk and that I wanted a stretcher. I was stalling for time, thinking that the longer I could keep him the better chance I should have of being picked up by some of our own fellows. However, he too, eventually went away and he never came back.

Within 10 minutes another Turk came along. On his way to me he had to pass a number of other Australians wounded. I saw the brute draw a bayonet from the scabbard of a wounded Australian and then thrust into the wounded man's stomach. I yelled out at him. I could stand it no longer. He heard me all right. I cursed him in good Australian. I could no longer "lie dumb". When he came towards me I at first pretended to be asleep, but he soon made it clear that he had heard me speak. He picked up a 4 pound lump of rock that lay nearby and holding it in his hand, began to pound my head with it. When I raised my hands to fend the blows off my head he transferred his attentions to my body, about the ribs. Eventually he batted me till I lost consciousness. When I came to, there was a party of four or five Turks nearby. They were talking loudly and rapidly and it was their voices that had wakened me. They signed to me to follow them, but when they found that I was helpless they seized hold of my hands and began hauling me down towards a gully nearby. My idea is that they intended down there to "do me in" properly and then strip me. But an officer suddenly appeared, accompanied by a Turkish orderly, the latter carrying a rifle. I think the officer was a German; he certainly was not a Turk. As soon as he saw the officer they dropped me and started to run away. But when the officer called them they came back again, the Turkish orderly covering them with his riffle. At the officer's orders the Turk picked me up and carried me to him. He did not speak English but I heard him say "hospital". I was handed into the care of the armed orderly. He also ordered me to walk.  I worked myself along for about 10 yards, backwards, using my hands. So far the fire had been as intense that I had not been able to sit up and apply my field dressing. When I had scrambled along, in the fashion indurated, for about 10 yards, I signed to the orderly that I could go no further. He cocked his rifle and put the muzzle to my ear. But I spied a dug-out in the side of the hill and eventually managed to scramble my way up into it. When I got there the orderly apparently wanted me to go further. He prodded me with his rifle and again threatened me with it. But when he saw that I was "clean done in", he left me.