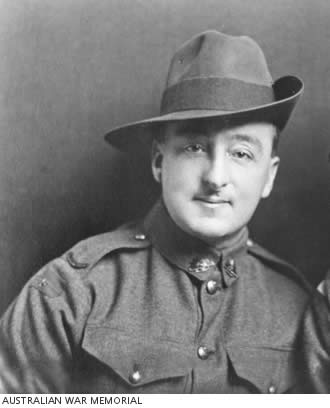 To commemorate the 100th anniversary of World War One I researched many of the Diggers from the Monbulk area and in doing so, many interesting things came to light.
Some young men enlisted thinking it was a chance for an overseas adventure and that they would be home for Christmas. Some went to great length to hide their true age so that they could sign up, one as young as 15.

I realised just how many were related to each other. Brothers, fathers, sons, cousins and brothers-in-law all left their families, who had to ‘keep things going’ until their return. The war impacted the whole community and the community supported each other both during and after the war.

It was easy to get caught up in some of the interesting stories of these men.  One of these men was Patrick O’Connor from The Patch and it is Pat’s story I would like to share with you today.

Pat’s story is quite different from others as he was taken prisoner of war. Fortunately for us he wrote a detailed account of what happened to him.

Patrick enlisted on the 18th December 1914.
He left Melbourne on the 19th February 1915 and arrived at Gallipoli on the 14th June.

On the 6th August 1915 the 4th Brigade of which Pat was a part of, left ANZAC Beach with the objective of taking Hill 971.

They left Rest Gully in Gallipoli about dusk passing through fields of stubble and then into open ground where they were subjected to heavy rifle and machine gun fire by the Turks. They were ordered to dig in.

Pat was among the men who were detached to bring water up for the men from down in the gully. Just as they left Pat was hit on the left shoulder by a piece of shrapnel but Pat continued down to get the water.

The next morning the Brigade advanced again to Hill 971. By this time Pat’s wounded shoulder had become very stiff, for he had not been able to see a doctor nor had he been able to have his wound dressed and bandaged.

It wasn’t long before they were being subjected to machine gun and rifle fire from the enemy once again.
Pat was just getting down into position when he received a bullet through his right foot. He fell heavily, luckily behind a large rock. The pain of his wound made him roll over and in doing so, he exposed himself to the enemy and was being persistently sniped at. One shot went into his right thigh. He heard bullets repeatedly strike the big rock behind him. In his right tunic pocket he had 10 rounds of ammunition. A sniper's bullet exploded this ammunition but luckily Pat was not injured by the explosion beyond having his skin taken off his right hip.

Unable to move, Pat had to wait for help. But it wasn’t his comrades that arrived first. Pat lay still in hope he would be overlooked but that wasn’t to be. A succession of enemy soldiers raided his belongings including his money belt, a few cards and letters and Pat’s watch which he had hidden in a tobacco tin. They also took the ring from his finger.

It wasn’t long before Pat witnessed another wounded Australian, who was lying not far from him, get brutally attacked by a soldier. Pat couldn’t "fake sleep" any longer and yelled out at him, cursing him in good Australian!
The soldier approached Pat picking up a large rock that lay nearby and began to pound Pat’s head with it.

When Pat came to, he was dragged towards a nearby gully then, with a rifle to his ear, made to drag himself to a dug out in the side of the hill.
Once there he was given first aid by a kind Armenian soldier who bandaged Pat’s wounds. Furthermore, he gave Pat a drink of water and a couple of cigarettes.

Just in front of the dug-out was a main track which Turkish horse trains were passing by. The Armenian gave instructions to have Pat put on an empty pack horse.

Pat was taken to a dressing station where there were already a number of wounded Australians. Later that evening Pat, along with the other wounded men, were taken on ambulance carts about 10 miles on bumpy roads until they found themselves alongside a pier. There lay a small steamer that was flying a hospital flag.

They had arrived at what appeared to be a convalescent camp for Turks. While waiting to board the boat many of the wounded men were subjected to cruelty from Turkish convalescent patients.
Once aboard, the small steamer carried them to Constantinople and from there to a hospital.
Pat stayed at that hospital for 11 days. During this time a Turkish doctor said his leg would have to be amputated. But that same afternoon a German doctor said he was sure his leg could be saved.

The next morning all the wounded were moved to another hospital where there were English patients. This hospital was appalling! There was no light, the windows had been boarded up, and there were only mattresses on the floor for them.

At 9 o'clock the next morning Pat was carried on a stretcher to a room where the bandages on his wounds were unrolled and his wounds examined. A chloroform "bag" was thrust over his nose and later, when he resumed consciousness, his leg was gone!

Pat underwent two further operations at that hospital to remove small fragments of bone from his leg.

The wounded Australians in that hospital had a very rough time. They were fed alternate dishes of boiled wheat and steamed wheat with molten fat. There was no change. They were held there for about 5 months until January 1916.

In January, Pat was returned to the first hospital he had been in. During this second stay Pat was again operated on twice. In the second operation they removed a piece of bone from the stump of his amputated leg. The operation revealed that on the first occasion to amputate his leg, the bone had only been partially sawn through, and then snapped off!

Pat left there in September 1916, being moved from hospital to hospital over the next 14 months. During this time Pat underwent another operation, this time to remove portions of his scull from injuries sustained when he was first captured.

By late November Pat was told that he and the other prisoners were to be sent home. It proved to be correct as they all set off for England on 27th November 1917.

Over the next 6 weeks the group of about 280 men, consisting of many nationalities, travelled through Turkey, Austria, Switzerland and then France by train before boarding a hospital ship that eventually took them to England.

After many months in a hospital in London, Patrick finally returned to Australia on the 10th March 1919, more than 4 years after he left.

A huge gathering was arranged in honour of his return. Many returned soldiers from the Monbulk district attended along with their families as did Jeannie Gunn and her sister Lizzie Taylor who had been a great support to all the soldiers and their families throughout the war. Mrs Gunn had also arranged for Billy Hughes, the Prime Minister of Australia at that time, to attend.

A little known fact about Patrick O’Connor is that his journey was used as the basis in the movie “The Water Diviner” starring Russell Crowe.
The Water Diviner is a fictional story about an Australian farmer named Joshua Connor who travels to Turkey to find his three sons who went missing during the 1915 Battle of Hill 971 at Gallipoli. His eldest son is located alive, surviving as a Prisoner of War. To find his son Joshua travelled the same route as Patrick O’Connor had during his time as Prisoner of War.

Patricks’ story was not unique but his writing does reflect the real horror of war and the many stories that were never told even to close family. Pat’s story is still relevant even today as we must never forget the sacrifices such young men made and should value the freedom we have and the strength that lies within us as individuals and as a community.