Patrick's parents Edmund and Agnes O'Connor selected land in The Patch when the area was opened up for selection in 1893. Their 10 acre block was situated on the big sweeping bend on The Patch Road in The Patch. Before enlisting, Pat played football for Monbulk. He played in the 1912 Premiership team.

Patrick O'Connor recorded a long and detailed report of the days prior to his capture and all his subsequent difficulties as a Prisoner of War including brutal treatment, torture and ill treatment until final repatriation. The report includes reference to life in the trenches and a minor wound before capture, several wounds on the day of the capture and an attempt to beat him to death with a rock before being taken away for internment. He also witnessed the murder of an Australian wounded soldier by the Turks.

When Pat first returned home he lived on his father's property at The Patch. He rode round on a horse. Pat was once heard saying to his friend Smasher, (Harold Wakeman) who was just a little bloke. "You know, Smasher, you'd make a decent leg for a man!"

Pat was known as Patsy O'Connor to many of his friends in Monbulk.

The road opposite the O’Connor selection property was the beginning of what was once known as ‘The Bridle Track’ which ran from The Patch Road through to Gleghorn Road in Kallista. The Patch end of that road was later re-named “O'Connor's Road” after Patrick O'Connor.

Patrick's story was related by Jill A'Vard at the 2017 Monbulk RSL Anzac Day service. You can read the Anzac Day speech here.

(The original handwritten Repatriated Prisoner of War Statement can be viewed here.)

Our Brigade objective was Hill 971. My Brigade - the 14th Brigade, made up of the 13th, 14th (Pat's), 15th and 16th Battalions left ANZAC Beach on I believe, the 6th August at any rate it was two days before I was captured. My Battalion had been in the trenches at Courtney's Post, but for some weeks prior to the date of my capture by the Turks we had been lying in Rest Gully. There we were doing fatigue work and mounting guards in the gully and on Anzac Beach. One fatigue job we were on was the widening of a trench towards Aneparto Village so that pack mules could pass along it. 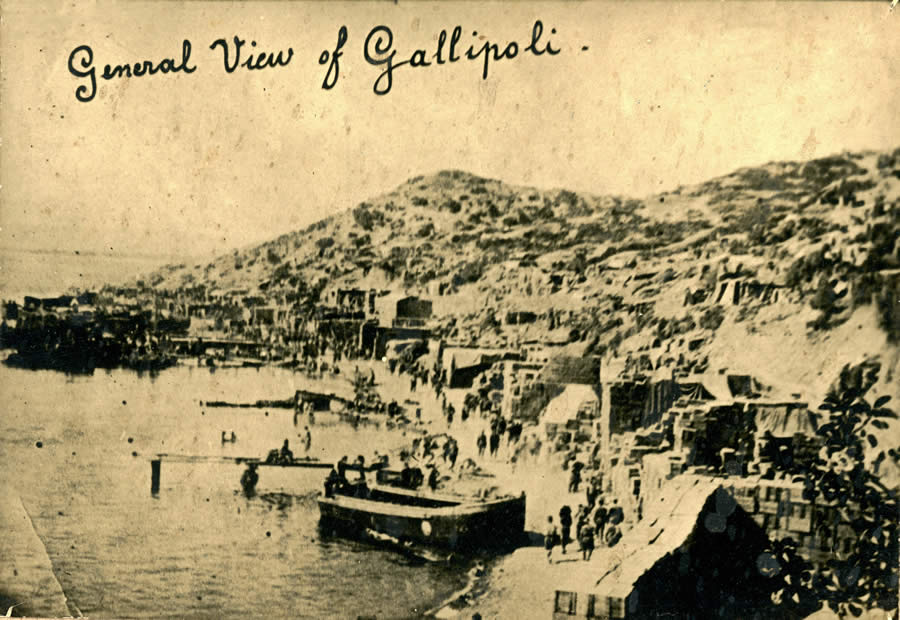 We left Rest Gully about dusk on the 6th August and moved along the beach. We passed through fields of stubble and fields of corn until they reached a comparatively level plot of land at a right incline to a lofty hill. There on this level plot, we got orders to "dig in". We could see the Turks on the hill on our right front and, indeed, here and there all along our front. Alas facing the Turks, on our extreme right, were the Ghurkas. We had to dig in on virgin land. As soon as we had dug enough earth to fill a sand bag we used that sand bag as a protecting barrier in front of us until we could dig enough to fill another. In this way we built up a soil of parapet as we dug. While we were digging in we were subjected to a heavy rifle and machine gun fire by the Turks. Eventually it was found that there were too many of us for the trench we were digging. We were in one another's way and could not work in comfort. So the extra men put to work at digging a sap that led into a gully at our rear. The Quartermaster detached me and some others to bring water up from Headquarters which was down a gully. Just as we led off I was hit on the left shoulder by a piece of shrapnel. It was nothing very severe; it merely marked the flesh but bounced off the bone. I got down to the water where the Quartermaster (officer) ordered me to find the stretcher bearers and tell them also to find a hand in carrying water to the lads up in the trench. I found the stretcher bearers, some of them carrying wounded men down to the beach on stretchers, others returning from the beach with empty stretchers. I can remember one who was carrying a wounded Turkish officer. While we were digging in from time to time we noticed some Turks crawling towards us through the bushes. They were armed, carrying rifles, but although they would creep out now and again, they would not come boldly forward.

We found out later on that they were trying to give themselves up. A mate of mine - Pither, of the 16th Battalion (now missing) fired at one. The Turk fell down in the bushes. I also fired at one and believe I hit him in the back. He never fell, however, but ran back and re-joined his comrades. Those Turks then all scuttled into a little gully. An Imperial officer (Captain Rose) who was often with our Battalion, when he saw that the Turks were endeavouring to surrender, ordered us to cease firing. Roughly, about 20 Turks came in and surrendered. They were all unwounded. One of them spoke to Captain Rose, neither English or French. At any rate Captain Rose evidently understood what he said. This Turk gave an order and the others immediately put down their arms. They had rifles and bayonets. They had come out of a gully behind us, as we must have passed them so we advanced. The country was covered with bushes and we could not see at all well. 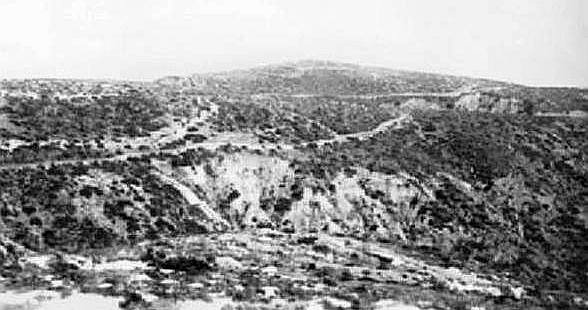 Hill 971 - the highest point and the objective of O'Connor's BrigadeThere were about 10 or a dozen of us in the water carrying party with which I was. When we got up to the bunch with the water we found that Q.M.S. Scott had been shot through the throat and had gone back to Headquarters. My platoon sergeant, Sgt. J. Allen, had also been wounded while in the trench. We had no sergeants, but someone gave the order to dish out the water to the men as they came out of the trench. By this time it was growing late - say 6pm. Pither and I had both been with the water-carrying party and were now waiting our turn at the trench digging. The trench was very narrow and we were trying to widen it. We originally understood that we were to dig a trench and then hold it as supports. That was the understanding from the N.C.O.'s and - through them - the men. When we were in Reserve Gully, I remember the N.C.O.'s being called up to receive these instructions. But at about midnight, or there abouts, we were ordered to cease digging, the reason given being that we were to advance again to the hill in the morning.

It was just breaking day when we advanced, the 13th Battalion, I understand, remained behind to hold the Trench. By this time my wounded shoulder had become very stiff, for I had not been able to see a doctor nor had I been able to have my wound dressed and bandaged. Pither asked me if I was going to remain and have my shoulder attended to or was I going on. I replied that I would go on with the rest.